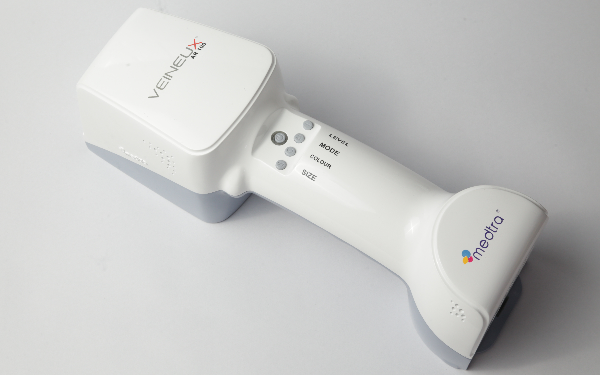 Locating a vein for delivering medicine is an important task in treatment process. In certain circumstances, intravenous delivery of medicine near to swift as the patient’s life might depend on this. This is where Veineux comes in handy. Veineux not only improves the success percentage of first-time vein puncture, but also reduce the cost of process and ease the stress on the medical team. IV access using Veineux AR 100 Clean the area using a suitable disinfectant. Apply a tourniquet on the arm. Place Veineux above the skin within a 35cm distance and start the product by pressing the ON button. Press the display button for the light to be projected. Focus the Veineux over the area to be injected. Locate the vein from the projection. Apply the needle.

﻿Veineux is the world’s most affordable vein tracking device using Augmented Reality, which will reduce the failed attempts during different intravenous medical procedures. The portable, flexible, and hands-free imaging facilitates the difficult process of finding a vein in a much easier and faster way, without changing standard clinical terms and practices. The medical team can now accurately assess the real-time situation of peripheral veins before, during and after piercing. Veineux not only improves the success rate of venepuncture in the first attempt itself, but also the satisfaction and comfort of the patients, thereby creating a stress-free solution for the medical team

Multitudinous challenges are faced on a day-to-day basis by phlebotomists, nurses and pathologists while detecting a patient’s vein for venepuncture. Improper puncturing may lead to problems such as swelling, bleeding or permanent damage to the veins, especially in cases with elderly subjects. To overcome these problems various devices have been developed but the challenge that remains is cost and portability factor. Also, very few devices have been implemented using infrared radiation, which is highly instrumental in detection of superficial veins in the human body. Therefore, the crux of the project is based upon implementation of near infrared light to detect veins and consequently carry out smooth vein puncturing.

NIR imaging works within the range of 700-1000nm and provide good quality images as NIR falls under a specific range of wavelength that can penetrate human tissues (up to 3mm of depth) resulting into a significantly better quality of images. The vein pattern is captured, stored, and software processed for better visibility. Thus, vein detection provides a non-invasive way to detect veins thereby preventing complications arising from invasive techniques.

There is a medical spectral window of light which extends approximately from about 700 to 900 nm, where light penetrates into the tissues, thereby allowing non-invasive investigation. Therefore, typically, the wavelength of the infrared light beam coming out from a light source is chosen to be within 850nm.

The basic phenomenon governing the vein viewing devices is that Near Infrared (NIR) radiation of the wavelength region 740 nm-760nm is able to detect veins but not arteries due to the selective absorption of infrared radiation in blood vessels. The reason for using the aforementioned phenomenon is the fact that the de-oxidized haemoglobin [deoxy-Hb] in the veins almost completely absorb the radiation while the oxidized haemoglobin [HbO2] in the arteries become almost transparent.

Veineux AR100 used above mentioned theory, implies it with the latest Augmented Reality, to project back the vein image produced by the algorithm embedded Single Board computer, to the skin from the image being captured. 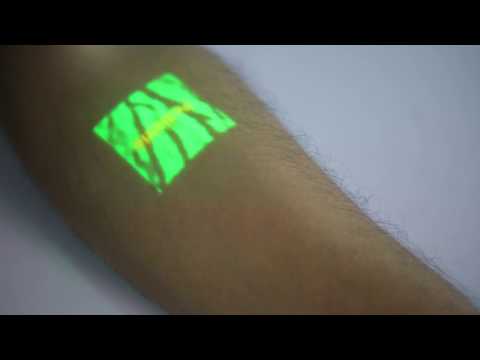